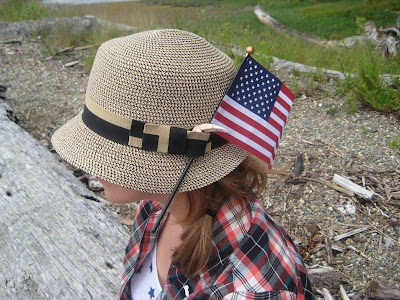 I'm one of these people who takes full advantage of cherry season. The thought that I won't be able to eat cherries for another eight months after September is enough to create gluttonous and wanton desire for them. I don't know if there is a sexier fruit? The deep red juices alone are enough to speed the pulse.

Besides eating them alone, I love making them into sauces. One in particular I like to make is a fresh cherry and rhubarb compote that accompanies grilled pork tenderloin rubbed with dried sage and fennel. It's a recipe from book 2 of EAT & DRINK in the Northwest.

When Mark and I were invited to our friend's cabin on Herron Island for the Fourth, I knew I wanted to make this recipe. The grilled pork with the spice rub could easily be eaten on its own, but the combination of the caramelized sweet herbs with the tangy cherry sauce creates a whole new element. 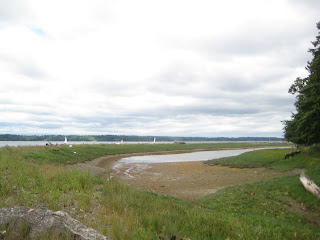 Herron Island  is a private island that is only accessible by boat and home to vacation and retirement cabins mostly. Only residents and guests are able to board the small 12-car ferry boat that shuttles cars from Key Penninsula, near Gig Harbor, WA. And it's about the cutest ferry you will ever see.


It's not crucial that you have a cherry-pitter for the fresh cherry and rhubarb compote, but I highly recommend getting one if you don't. Besides pitting cherries, it's  fantastic for pitting olives too. During the summer, my cherry-pitter hangs out with the popular kitchen tools instead of at the bottom of my "Er" drawer.
The pork recipe is a great one for a crowd. Pork tenderloin is unbelievably inexpensive and if cooked right, it can taste amazing. To accompany the pork, Mark and I grilled corn on the cob with sage butter and made a Sweet Potato and Chickpea Salad. I'm absolutely obsessed with the dressing on this salad- simple, creamy, tangy and packed with flavor. 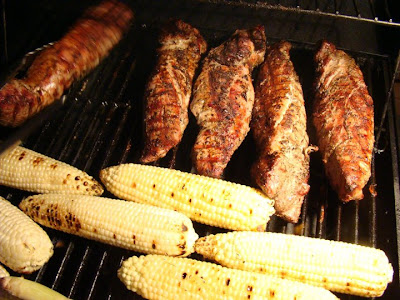 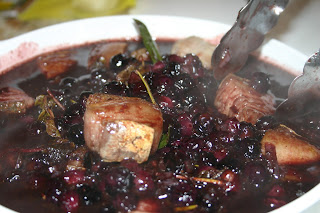 Our dinner was a huge success and even received a hilarious slow clap standing ovation! It was a weekend that would be described in children's Golden Book story: a cabin in the woods with friends, long walks, phosphorescents in the water at night, blue skies and warm breezes and so much laughter. 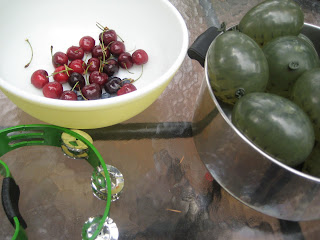 In a large oven-proof sauté pan on high heat, add 1 tablespoon of olive oil.  Add tenderloin and sear on all sides until light brown, for approximately 5 minutes. Place the pan into the oven for 12-15 minutes until pork juices run clear and is slightly pink in the middle. Temp should reach an internal temperature of 145°.
Transfer pork to cutting board; let rest 5 minutes. Cut pork crosswise into 1/2-inch-thick slices and divide them between 4 plates.  Serve with Cherry Rhubarb Compote

Love the new look of your blog!

I can personally verify the deliciousness of these recipes!

When reading Melissa's blog side effects may include:

-being very inspired from the written descriptions and photography

Thanks Jen and Adam!

So much more ahead!