Vanilla Panna Cotta with Blueberries You Can Make at the Ocean 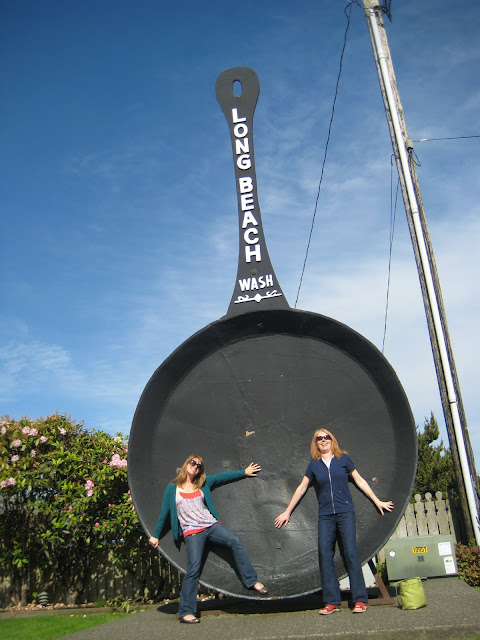 I recently went on a two-day vacation to the ocean with my mother. I thought it would be a good thing for us to get away and reconnect outside of Seattle, outside of all my father's shirts still hanging in their closet, his shoes at the foot of the stairs and even his breath mints sitting on his desk next to his watch. Each morning, I can imagine these constant reminders making the nights longer, everyday tasks more challenging and the healing process of trying to move on seem like walking in wet cement.

Not only was it good for both of us to get out of town, it was great for us to go together. I'm 31 years-old and I have never been on a road trip with my mother by myself. It's always been family outings growing up, laughably classic were our family's 24-hour vacations to be exact. We didn't have a ton of money growing up, so our vacations were short and sweet.

While on our trip, my mother brought all the necessary ingredients to make vanilla panna cotta with fresh blueberries. I guess this is where I get it from! Who brings ingredients to cook while on vacation? Let alone panna cotta? Shouldn't we be making Smores? Well, the cabin that we stayed in had a kitchen and she wanted to use up some blueberries, in all honesty. So naturally, she packed ramekins.


The first evening after we checked in, I decided if we were going to make the panna cotta, we had better make it first thing in the morning, so that it would set while we were out and about on the beach. Before I had a chance to get the dessert started, I actually woke up the next morning by a smell. Sure, anyone can wake up by noise or touch, but waking up to my mom's breakfast hash browns might be the most comforting sensation I could imagine. How a woman battling her own cervical cancer could be up making coffee, chopping onions, peppers and potatoes was beyond me. I remember feeling like a guilty slug under the covers realizing it was almost nine and I hadn't stirred once as I heard her stirring a pan of a hundred aromas in the teeny cabin kitchen. 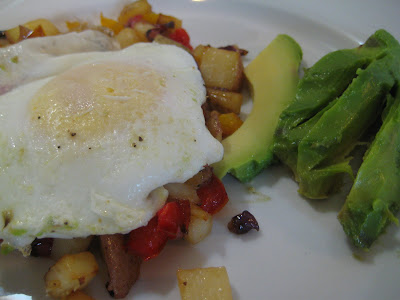 Maybe it was just as much of a treat for her as it was for me- her making me breakfast, like I was a kid again? I'm not sure. She likely has no idea how good those homemade hash browns with one of her own chickens' eggs fried on top, were to me.

The thing is, my mother, like anyone else in her situation hasn't been cooking lately. For the past five months, if it wasn't because of pain, it was lack of time. She never left my father's side, and if she did, it was to grab something quickly. Who was inspired to cook? There were times when I would come over and ask what she had eaten that day. Sometimes I would get there at 5:30 and all she had had was a hard-boiled egg and a half of a banana.  It sent me into chef-overdrive. Sometimes I would cook up to five dishes before leaving, just to make sure my mom, little sister and my father had something healthy to eat. This is where I need to add that I wasn't alone in this! My siblings, aunts, my mom's close friends and my father's co-workers all came each week with arms laden with casseroles, chicken soup and warm Crockpots. When it comes to crisis, everyone needs food made with love.

I realize this closing recipe should be of those peppery, onion-y salty, potatoes that my mom made for me at the ocean, but I felt it appropriate to leave you a lasting impression of why I cook today. Making a big deal out of making vanilla panna cotta is weird to my mom. Why not? "It's so easy," she would say, "and I LOVE panna cotta!" 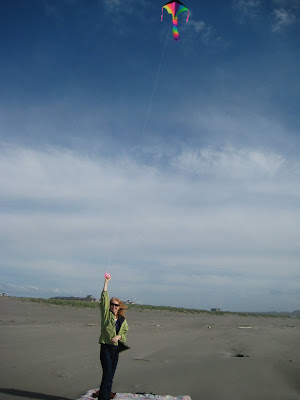 I ended up making the panna cotta that morning, while she painted her fingernails on the couch. After a great stroll through the town of Long Beach, kite flying on the shore and too much salt water taffy, we ended up splitting just one of 4 panna cottas after a heavy razor clam pasta at dinner. It was something we could share, something  you can't buy in a box and most definitely something that is so my mother.

Lightly oil the ramekins
Sprinkle gelatin over the cold water and let stand for a minute to soften.
Combine cream, half and half, and sugar in a 3 quart saucepan and bring just to a boil over medium high heat, stirring until sugar is dissolved.

Remove from heat
Stir one cup of the cream mixture into the gelatin, then stir the cream and gelatin mixture back into the saucepan. Stir in vanilla

Divide the cream mixture among the ramekins and let cool to room temperature, then cover and refrigerate until the panna cotta is set (at least 4 hours)
To remove from ramekins, dip one at a time into a bowl of hot water for 3 seconds, then run a thin flexible knife around the inside edge of the ramekin. Tilt it slightly so that the panna cotta pulls away from the sides.
Invert ramekin onto a plate so that the panna cotta slips out.
Top with fresh blueberries and serve.

I've been thinking about taking a weekend trip with my mom, and after reading your post (and your lovely, moving 'Taking Stock' post), I think I need to book it today. We don't have nearly anything going on in our lives compared to that which you've had this year, but it makes me realize how precious the good times are. Thanks for opening up, Melissa. I'm so glad to know you.

Yes, life is short- I'm curious to hear where you decide to go. Thanks so much for reading, this year has been UNREAL. Do you cook with your mom/ does she live close?