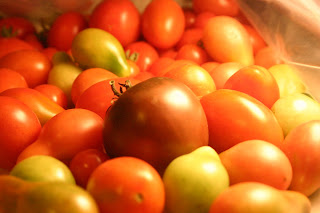 Even though it’s mid-October, I am still picking tomatoes off my plants. Yesterday I had an entire gallon-sized bag of tomatoes that I wanted to use up. So ripe, juicy and sweet- I knew these tomatoes would likely be the last of the season and therefore needed to be used in a special dish. Earlier I had bought some wild salmon, fresh herbs, a sweet onion and some chanterelle mushrooms. Normally, I wouldn’t pair a delicate flavor like chanterelle mushrooms with rich salmon or tomatoes, but I was in a risky mood. What could those flavors be like together? Would the chanterelles get completely lost in the dish? I decided to find out. 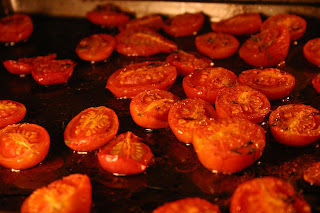 I sliced about two cups of the tomatoes in half and gently coated them with olive oil, salt and pepper and fresh thyme leaves. Next I spread them out on a sheet tray and put them in the oven to roast. When sweet tomatoes are slow cooked, they get even sweeter. Candy-like actually. To really slow cook them, I would have had to cook them in a 200 degree oven for two hours, but most week nights don’t allow for that kind of time. So I put these in a 400 degree oven for 10 minutes and reduced the heat to 300 degrees and cooked them for another 10 minutes. 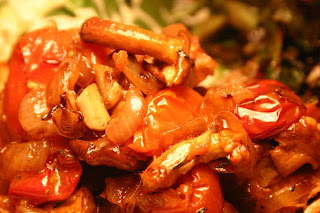 While the tomatoes were cooking, I sauteed the onions and mushrooms with olive oil, added some garlic, salt and pepper and a little more fresh thyme. Once the tomatoes were done, I added them to the mushrooms and onions. Then I seared the salmon separately, just to medium rare, with only olive oil and salt and pepper. I placed the salmon on a plate and covered it completely with the rich tomatoes, chanterelles and onions. For a second I was like, oh man, you took something so great and you wasted it by drowning it in sweet tomatoes! But you know what- it worked! Juicy-sweet layers of flavor capturing the end of summer and the beginning of fall in one dish.

** Also posted on the Foodista blog

Thoughts on the End of Gourmet from a Bloggers Perspective *Taken from my previous posting from Foodista.com

As a passionate subscriber of Gourmet magazine for many years, and a writer for an online food encyclopedia, it’s only natural for me to have mixed emotions about the closing of a legendary print publication like Gourmet.

Just this summer, Gourmet’s circulation was still at its decade- long high peak of 978,000. So what was the real deciding factor to suddenly shelve a 68 year-old, beloved cooking magazine that for some, our great grandmother’s subscribed to? Was it because Gourmet needed to turn its focus to an online audience and balance its advertising between the two? Or is this just another example of how times are changing, for better or for worse?

I’m sure there are more than a couple reasons behind Conde Nast’s decision to stop the presses on Gourmet, but one of the main reasons for sure is that Conde Nast also publishes Bon Appetite, another cooking magazine which has a larger subscription base, and according to the L.A. Times, tends to focus on more economical recipe driven content. No one can argue that there is a growing need for cheap meals, I understand that.

But, as much as I can agree that each Gourmet magazine must have cost a fortune to produce, I don’t agree with the statements that Gourmet spoke only to an elite audience that cared solely about luxury hotels and four star restaurant reviews. Not too long ago, I was a broke culinary student ear tagging Gourmet recipe pages and circling menu ideas in bold red pen because I was so passionate about a recipe that had inspired me. For many culinary students, Gourmet was just another text on our required reading list.

Besides writing only about caviar and molecular gastronomy, those who have read Gourmet in recent years can also attest that Ruth Reichl devoted several full page articles in recent editions to the farm to table movement; including interviews of humble farmers and lengthy pieces on the importance of eating local.

New media brings with it, new advertising possibilities and to print, advertising dollars mean everything. Nostalgia aside, if someone were to ask the question “So is online media to blame for the death of print?” My answer would be “Advertising dollars say yes.” What’s more, people are consuming media in new ways, for example instead of a press release from Conde Nast being announced on the radio or learning about the end of Gourmet in a farewell issue, Gourmet’s readers are learning from a Twitter post re-tweeted from a friend that the magazine will no longer be published. So from an advertiser’s perspective, I can understand where the advertisers would want to place their ad dollars.

The ability for companies to see the click through rate on their ads, and receive measurable results on exactly how many people have viewed an add, and then discover the amount of people who purchased a product directly from their ad is something that traditional media has a hard time proving.

As much anguish as I feel about the end of a print publication that has affected millions, I am writing this on a food blog and posting it to the web.