SOLD OUT – June 26: Learn to Make Pancetta and Lardo with Mangalitsa Pork

Mangalitsa Pig
[To be added to our cancellation list for this event, drop us a note with your name, email, and phone number. If anyone cancels, we'll put you in touch with them to buy their ticket.]
Join Slow Food Seattle on Sunday, June 26th from 3-5pm and learn how to make your own homemade Mangalitsa pancetta and lardo at the Westlake Serious Pie location in South Lake Union. Heath Putnam (founder of Heath Putnam Farms) and Serious Pie chefs Tony Catini and Kenan Fox will lead a class on curing and producing lardo and pancetta with Mangalitsa pork. After the Mangalitsa presentation and demonstration, we’ll enjoy a three-course lunch provided by Serious Pie.

Capacity for the class and lunch is 25 people as space is limited.

Participants will be able to take their lardo home the day of the event, and can pick-up their pancetta once it has cured.
$50/person – Ticket includes the class, lunch, and selections of lardo and pancetta to take home.
Slow Food Members receive advance notice and a discounted rate for all of our events. This one currently has just 9 spots left!
Current Slow Food Members: email us for the member discount code 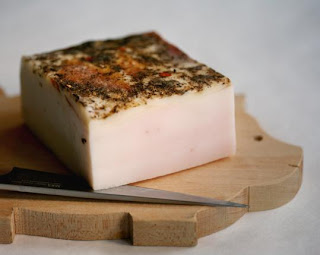 Lardo
According to Putnam, “Mangalitsa pigs are a traditional breed, essentially unchanged from 1833. In the past, when plant oils and margarine weren’t available, Mangalitsa pigs produced the fatty products like lard, lardo and bacon that consumers demanded. Mangalitsa pigs aren’t necessary anymore, but they taste the best and produce the best products.”
What is a Mangalitsa Pig?
In 2006, Heath Putnam, the founder of Heath Putnam Farms, encountered Mangalitsa while working in Europe. Impressed by its exceptional quality, and aware that America had nothing comparable, he imported a herd and began production here in Washington State. Unlike all popular breeds of hogs, which are meat-type, the Mangalitsa is an extreme lard-type breed. The Mangalitsa (pronounced MON-go-leet-sa) was created in 1833 by the Hungarian Royal Archduke Jozsef. Lard-type breeds produce high-quality fat and very marbled, juicy and flavorful meat. Mangalitsa fat is more unsaturated than normal pig fat, so it tastes much lighter, cleaner and melts at a lower temperature. The fat is also healthier and keeps longer, due to higher levels of oleic acid. For more information on Mangalitsa pork and where to find it, visit Heath Putnam Farms.